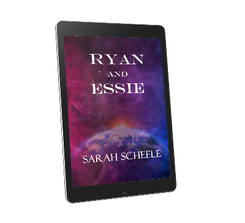 I am Tarvelas of the Emerald Castle. On Caricanus, a planet far beyond yours in the distant reaches of the universe, my home is called Castile Enfarm. It is one of the seven great castles of Caricanus. Each one was carved out of a great jewel in ancient times and filled with the light of Trisagion. Our deity.

My home is dying. Humans made this planet's history when they came to it from your world. Now, two humans have come to Caricanus again. A boy and a girl. They are named Ryan and Essie. They are ordinary children except they both possess far too much stubbornness. Their coming is the fulfillment of a prophecy and I know it will kill me. I can feel it. I won't be the only one who dies. What is happening will shake up and change the whole world. And I also know, strange as it sounds, that this is a very good thing. If your world is falling into darkness, there are worse things than death. There are forces of total destruction. These two children represent life and in doing that they bring death to what is old, but not destruction. Right now they focus too much on what is unimportant, on things that don't need to be looked at.

They must learn to care about others.
Visit Bookstores